Brief: “Develop a series of yarn designs and simple textile constructions in response to the colour work you carried out in Ex 3.2.”

Really liked these concepts, some look like they have plastic knotted in. Some great shapes are formed with this technique giving the work a modern look. Combines, weaving, knotting, plaiting, knitting and wrapping.

I really liked Dana’s work as although using seemingly easy techniques like knotting and braiding she manages to convey a range of colours and tones and organic forms that really relate to her inspiration images. The large scale of her work is impressive too.

Florence is a contemporary textile artist who specializes in handcrafted fabrics . I looked at her Renegade and Twisted collection for inspiration. The renegade collection is mostly weaves with lots of different techniques. I especially liked the fact that it looked like she had used ‘scoobie’ (plastic laces used by kids to make bracelets)  bracelets in the weaving as it gave a pop of whimsy to the piece. In her twisted collection there was a yellow and blue piece I particularly liked as it looks like she had used over spun wool to create the twists and they really appeal to me due to their shape and texture. I have used them in several pieces of work in this assignment.

I have included images of the above works that I mention in my sketchbook.

I started off with knotting 2 pieces of embroidery thread together in different ways but to be honest the thread was just too fine to get any sort of structure, it just looked like tangled thread. I moved onto chunkier wool I had used for the yarn wraps in 3.2. I cut two lengths of each colour and just knotted and twisted randomly, trying to create an organic type structure. I tied knots on top of knots on top of knots to build structure and depth. I liked the chunky wool but it was only representing 2 colours. I didn’t have chunky wool in the other colours from 3.2 so I went back to what I did have- the DMC embroidery threads, wool, silky cord and jute string from ex 3.2. I made smaller knotted pieces in matching colourways to the yarn wraps, to attach to a bigger chunky wool piece. I like the freeform nature of the piece, the knots are random, some bigger than others, representing the dabs of colour from the Impressionist painting I chose. (Top middle and bottom row photos above).

I then looked at Macrame to create a more structured piece. I looked on Pinterest and Youtube for tutorials and found one for reversed half hitches. I used the two chunky wools again and this created a very defined, even form that twists down around the strand. (top row first 3 photos on image below).

I wanted to try a macrame piece with more colours so I found instructions for a macrame braid knot on Youtube. This was more difficult as it used 6 colours in 12 strands. The resulting pattern was a criss cross weave type pattern, showing little dashes of different colours, reminiscent of the brush marks on the painting. I used different thicknesses of yarns which has given it a very textured look. The colours of the chunky wool dominate so If I did it again I would add more reds and purples so they stand out a bit more even though they are thinner- maybe double or triple strand them? (top right and all bottom row on photo below).

I liked the fact that the second macrame piece looked a bit like weaving, I thought it gave more interest and texture to it, so I decided to try some weaving for the final piece. The only weaving I had done was on the cardboard loom I made earlier in this assignment so I found a cheap frame loom on line so I could make slightly larger samples. I decided to combine the purples and the reds and burgundies for the first piece. I found instructions on Pinterest for basic weaving techniques. I wove a base of the different colours but it looked quite flat so I added some embroidery detail based on one of the mini wraps from 3.2 with embroidery thread. This changed the look up a bit but I felt it still looked a bit flat. If I were to do this piece again I would try and add the texture into the weaving rather than embroidering on it afterwards. (Top right photo on image above).

I decided to expand on the weaving, using a different colourway from 3.2 so I could incorporate chunkier yarns for more texture. I started with just the basic over and under weave technique- this gave a very even, consistent pattern but again, very flat. I then tried wrapping the wool around each warp thread to add texture, which it did, but not very consistently- my newbie weaving skills I fear. I moved onto using sari ribbon as I thought the frayed edges would add texture along with the subtle colour change of the ribbon. This worked well and I liked the contrast of the silky ribbon, frayed edges next to the chunky wool. I did a few more lines with the brown chunky wool then a few lines with an orange boucle thread. That gave a really nice texture and looked a bit like the twisty yellow wool from the Florence Spurling piece I liked. I added more sari ribbon bit without the frayed edges and finished off with a thinner wool which gave a tighther look and texture. (Top right photo on image above). 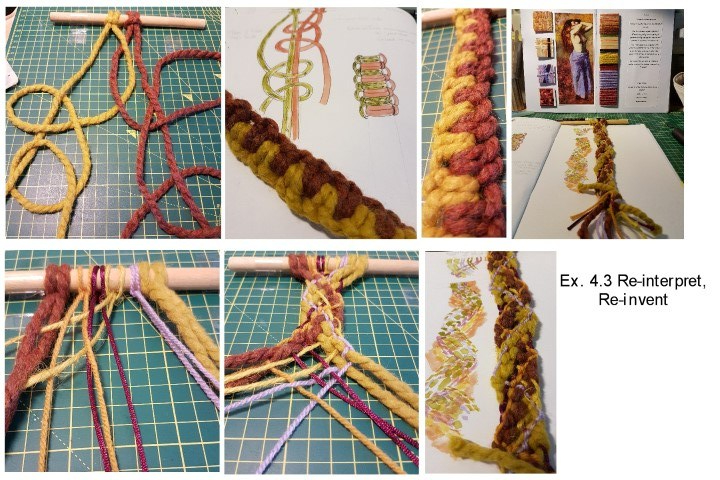 How did you build from your successes?

I started with the freeform knotting which gave an organic, unpredictable form, onto the more structured knotting of macrame, creating more defined forms with marks that mimicked the dabs and dashes of colour from the impressionist painting from 3.2. I chose to take this further into woven pieces as I felt the texture of the weave would better represent these marks.

What did you learn from any failures?

I tried the freeform knotting with embroidery thread first and it soon became apparent that the thread was too fine to create anything structural so I needed to explore thicker/chunkier yarns in conjunction with the finer yarns to achieve the look and feel I wanted, which was reminiscent of the impressionist marks of the painting. I need to be more explority.

The aim was to push the techniques towards your own interpretation and reinvention of them. How did you tackle this?

I started from the knotting, just going my own way with random knots and letting the piece emerge with no pre desired design. I kept referring back to the yarn wraps and image adding in different colours in response to the percentage of colour in the pieces. I moved onto more structured pieces to try to better capture the texture, the brush marks and dabs of colour from the painting. The macrame gave a good result but to push that farther I thought weaving would better define the marks and colours. I feel there is quite a logical progression from the knotting to the weaving. If I had had more time I would have liked to have learn some more weaving techniques to better get across the texture of the painting, but I am happy overall with the finished samples.

How did you re-invent and re-interpret the imagery, colour and yarns from exercise 3.2?

I feel the weaving samples worked well to re-interpret sections from the yarn wraps and the paint marks from the impressionist painting. Although not obvious marks the lines and dashes formed by the weaving translate well to the dabs made by the paintbrush. Frayed edges, chunky yarn and boucle thread give shadow and texture to the weaving which translate well from the original image and yarn wraps.

Experiment more with knotting techniques and different types of knot, maybe using knotwork in with the weaving.

Look ‘outside the box’ for materials to weave with

This is a text widget, which allows you to add text or HTML to your sidebar. You can use them to display text, links, images, HTML, or a combination of these. Edit them in the Widget section of the Customizer.